I’m already a week behind in reporting on our long and festive four-day weekend! Well, better late than never. We begin on April 27th:  Koningsdag, the Netherlands’ annual celebration of the King’s birthday and all things Oranje. King Willem turned 50 this year and the country celebrated with the usual mix of parades, music, boats, and lots of drinking. 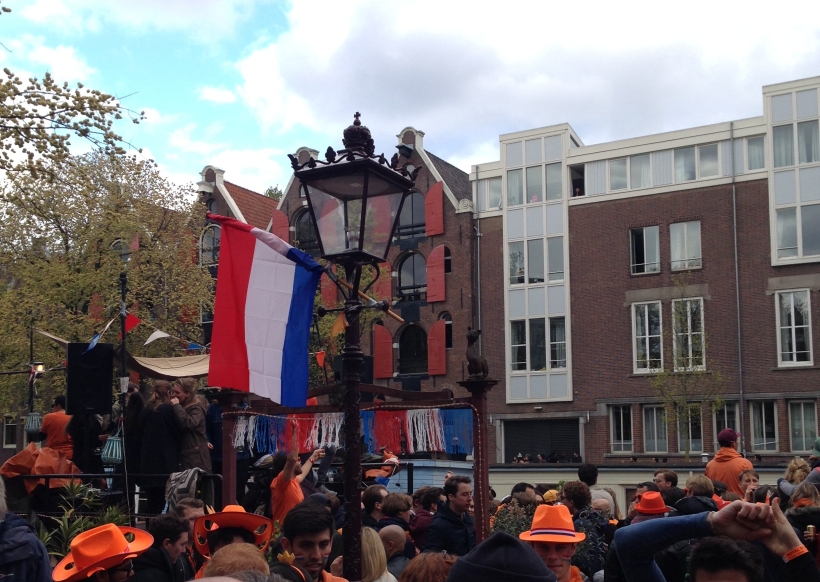 Koningsdag is a day like none other. First, it is the one day of the year that you can sell things without a permit, so Amsterdam becomes one giant flea market. Weeks before the holiday, people claim their space on sidewalks, marking their territory with chalk or masking tape. There are some traditional activities: children play music or organize games of chance, hoping to earn some small change. For a euro or two, you can throw eggs at someone who has volunteered for this strange duty.

In the city center, there are stages and DJs and food and drink everywhere. The first year we experienced Koningsday, we were both surprised by the atmosphere and the attitude. When you consider that most people have been drinking (some heavily) for hours, the party is remarkably friendly and festive. This year, we spent the morning in our new neighborhood, which had a festival that covered several blocks. In the afternoon, we met up with some friends in the busiest part of town, just off of the Prinsengracht. After getting through the worst of the crowd, we did have a good time, enjoying the people watching and learning some classic Dutch songs at a corner bar.

Continuing with the royal theme, on Sunday we decided to go to Kasteel de Haar, located outside of Utrecht. A colleague had gone recently and recommended it. Although it involved two trains and either a bus or a bike ride, we figured it was a lovely day for an adventure, and we headed out. I will note that on the Castle’s website, I read that the visiting hours were different due to an event (“Elfia”), but I didn’t think much of it. I really should have paid more attention to that.

In Utrecht, while we waited for the next train, we noticed a number of people in costume. A Hobbit here, a sort of anime-elf woman, there…no theme that I could figure out. When we got off the train in Vleuten, there they all were again. And more. It seemed clear to us now that something was indeed happening at de Haar, and it involved a lot of mythical creatures and very creative costumes. 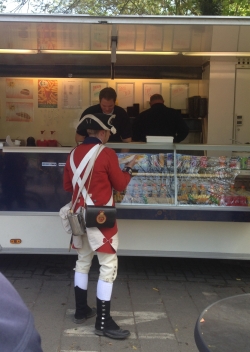 Every soldier needs a broodje.

With some help from a young Dutch couple (who were as puzzled by all the costumes as we were), we made our way via shuttle bus to a stop about 15 minutes from the castle. As we walked closer, we saw even more: zombies, British redcoats, guys from Braveheart, angels and demons and teddy bears. By the time we arrived at the entrance, it was clear that this was no ordinary day at the Castle. The Elfia fantasy festival was in full swing, and a visit to the castle would require a €24 festival ticket for each of us. Our curiosity was pretty high, I’ll admit, but not high enough to justify the cost of entry. We gave the elves their victory.

We did manage to rescue the day from complete failure. Another bus ride and a short train ride brought us back to Utrecht, a city we both really enjoy. We found a table in the sun at one of the many lower-level canal-side restaurants, and I enjoyed the season’s first glass of rosé. 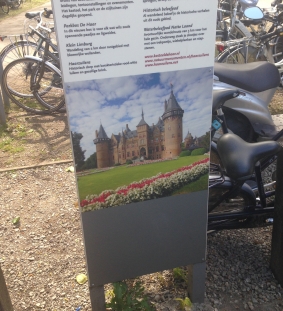 This is as close as we got to the castle.

What I still can’t figure out – and I’ve given it more thought than it merits – is the underlying theme of Elfia. In what universe do Luke Skywalker, fairies, Scottish warriors, Victorian ladies, Harry Potter and zombies co-exist? Maybe I’m looking for something that isn’t there, and, much like Koningsdag, Elfia is a celebration just for the sake of celebrating.

We will make another attempt to visit the Castle. Next time, though, we may try to convince some friends with a car to join us. And we’ll check the website first.