The view from Erice’s medieval fortress.

It’s been about a month since our long weekend trip to Sicily. I’ve started to post about it a few times, never with much enthusiasm. We didn’t love Sicily, to be honest, and it’s been hard to write about it without feeling like I’m being too hard on it, somehow. It’s not as if anything went wrong. We survived our first experience of renting a car (driving in Italy is serious business), had nice weather and some good meals. From Palermo, we drove to Trapani and made our way to Erice, where we toured a medieval fortress and savored the views earned by the sometimes-harrowing route up the mountain.

Sometimes I wonder if we’ve been spoiled by the travel experiences we’ve had since we’ve been in Amsterdam. We’ve eaten meals in Tuscany that we’re still talking about two years later, had conversations with 7th-generation winemakers in the Beaujolais region of France, and made friends in Berlin over beer and curry wurst. So when we travel, the bar is a bit high…we’re expecting a magical moment or two, or a great story to look back on. 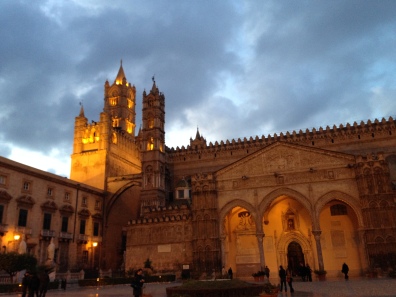 The Cathedral in Palermo

On the surface, Sicily didn’t provide those moments. Everything was…fine. But “fine”  doesn’t, at first glance, make for much to write about. In the weeks since our trip, I’ve been thinking more about our experience, trying to be more balanced about my impressions. But the truth is that not every place is going to “wow” you, right? Maybe due to weather or language or food or expectations, you connect with some places more than others. It’s not entirely fair, but that’s the reality of travel. I shouldn’t be too hard on Sicily, or on myself. 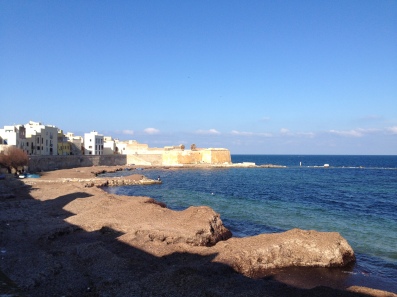 Looking back, we did, actually, have one memorable moment. (Most of the other good memories involve cannoli.) Mid-February is not high season for tourists in Erice, and at times we seemed to have the little town to ourselves. Walking down a side street, we stopped and stood still for a moment and just listened.  Complete silence. Not a dog barking, or a car horn, or a human voice. Just silence, and a little wind. Magic.